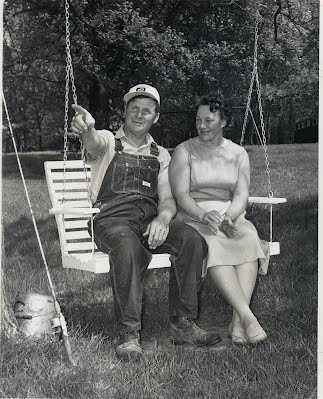 The idea for the lake hit Viola (Vi) Koch in 1952 as she and husband Marvin Koch ate a picnic lunch on their 280 acre farm five miles southeast of Tipton Iowa. The Koch's, who had saved money for a trip to Colorado that year, were gazing down on a swampy valley that always seemed to retain a lot of water. Vi, knowing that Marvin was a "stay-at-home guy", began to think of another way to use their vacation money. She said, “Let's just use this money for our own vacation spot'".

The Koch's hired a surveyor and bulldozer operator to build a dam. Within a year run off from rainfall made this soggy valley into a picturesque 4 acre lake surrounded by green rolling hills. The Koch's stocked the lake with bass, bluegill and, years later, catfish.

In 1955, they opened an office at the lake and began letting friends and neighbors camp there. Meadow Lake campground continued to grow in popularity and size over the years.

By 1973 there were 40 seasonal campers on the site that now had restrooms, showers, laundry, camping hookups, and a recreation hall.

In 1980, the west side of the lake was developed and opened to camping expanding the area to its present 70 acres and 80 campsites.

Marvin, who enjoyed playing his accordion at every camper’s campfire, passed away in 1999 and Vi left us on January 31, 2021 at 102. Today ‘the boys’ operate the business with brother Harlan (Kookie) carrying on the family tradition of country-style warm hospitality with new and ‘veteran’ campers.

Many members have returned to the Meadow Lake campground every season for more than 30 years. Several of them refer to this peaceful, green oasis as their ‘little bit of Heaven.’